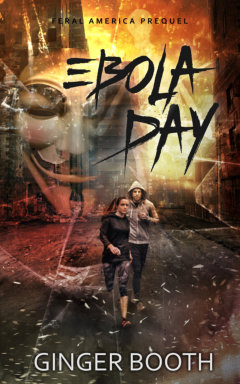 She fell in love. New York fell into chaos.

Before the Ebola epidemic, before the Starve, Ava Panic is a lonely teen.

Ava is caught inside the barricades as the U.S. descends into martial law. Food prices skyrocket, and riots fill the streets.

But Ava meets handsome Cade at her karate dojo, and her life changes overnight.

Cade is popular, wealthy, a top student. Heady days follow of friendship and freedom, and budding romance. Ava finally belongs. The mean streets are their playground.

But there's a dark side to Cade. And maybe being with others isn't safer.

Maybe it's a trap.

Dammit. She was only thirty feet from the subway stairs. But so were hundreds, maybe thousands of others. There was no telling where Kat and the others might be. Sensei, Kat, Jake, Rafe…bunch of black gi jackets… Then she laughed out loud and waved.

Kat hung from the walk light across the street. Sensei’s broad back wedged her up. Her lustrous brown hair was done in ashen dreadlocks, her face painted as a grey ghoul. Sensei’s head was the sort of creepy clown to terrify children.

“Found them!” Ava reported below, with a grin. Cade pulled her down into his arms and stole another kiss, more lingering this time. He was having a blast.

“Get a room, guys,” Gary objected.

They locked arms again to force their way cross-current to Sensei, easy to spot now in his whiteface and balding red clown wig, atop a linebacker’s triangular build.

“Huddle!” Sensei ordered, once they arrived. The half dozen teens from the dojo team threw arms over each other’s shoulders and pressed into a tight circle. “Listen up. I expect teargas. I expect the crowd to panic and run. I expect trampling. People will get hurt here. Don’t be one of them. And don’t trample anyone either. You step on anyone, and I’ll knock you flat myself. Got it?”

“So what’s the plan?” Sensei demanded.

“Continue to the dojo,” Gary chimed in.

Kat offered, “Cade and I have keys. And Sensei.”

“Everyone have a phone?” Ava asked. “If you get separated, text Sensei.”

Rafe nodded. “Tell him your plans. Whether you’re headed home or the dojo or what.” Rafe was a year behind the other boys at St. Ignatius.

“First one to the dojo orders the pizza,” Jake added.

They didn’t get far. A cordon of cops with transparent riot shields was forming to block 6th Avenue north.

Get it now to see how it all began!