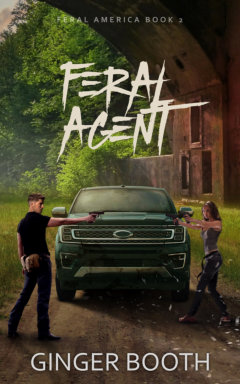 Flunked out of the Army.

Reunited with her erratic boyfriend Cade.

Ava Panic sets forth on her new career as a secret agent. She joined the company – the so-called ‘death angels’ – to be with Cade. He claims the job is orgasmic. Great food. Lots of fun. Freedom and the open road.

Some killing required. But the young gang rats are old pros at that.

But her training is a rush job. Their team races the Ohio Army into the failed super-state of Virginia for the company’s toughest mission ever.

Feral Agent is the sequel to Feral Recruit.

Note: Ava and Cade use fake names on the road - Cheyenne and Ben in this scene. Darcy is Cade's car.

At Ben’s suggestion, Cheyenne took a nap to recover from the adrenaline of her anxiety attacks. She woke to sudden dark, as they plunged into shaded deep woods, on a looping path through a state park. Quaint and rustic wooden structures were dotted here and there, cabins and picnic pavilions, carved wooden signs and trail railings. A sign advised the park was built during the last Dust Bowl when the American economy collapsed, and the government hired the poor to build public works — a time like now.

Cheyenne felt closer to that era than the one she grew up in. Those migrating work crews were real. To her, the petty debates and materialism before the epidemic felt like a cruel lie.

They didn’t spot another soul in the forest. Twice Ben stopped to haul fallen branches off the road before they could proceed. The third time a tangle of fallen trees blocked the road. Ben turned back to the last parking loop they passed.

This proved more appealing than she expected. A wide level parking area opened up a swatch of sky, sporting fast-scudding low clouds. A generous roofed pavilion over picnic tables and cooking grills, complete with a wooden outhouse, met a trail head promising a scenic overlook of the canyon. Ben parked Darcy alongside the pavilion, almost like a big house for the night.

Cheyenne alighted and stretched in delight. Mindful of her status as an agent trainee, and Ben’s disciplined ways, she peeked into the outhouse and deemed it creepy. Instead she dug them a proper field latrine behind it. She stowed the shovel back into Darcy.

Ben leaned against the car, studying the clouds. As she passed him, he said frowning, “You know I love you. Right?”

He’s in a mood, Cheyenne thought, not sure what mood that might be. “You know I love you, too.” He still looked distant, so she left him with a quick peck on the cheek. She waved their roll of toilet paper to suggest she still had business, and headed back to her newly dug latrine.

She was squatting when a shot rang out, and some fragments of bark hit her. On reflex, she pivoted on one foot and spun around the side of the latrine for cover, staying low, and pulled her pants back on. The toilet paper she shoved into her hunting vest pocket. Unbelieving, she carefully peeked around the farther edge of the outhouse.

Ben met her eye, right above the Glock pistol he aimed straight at her.