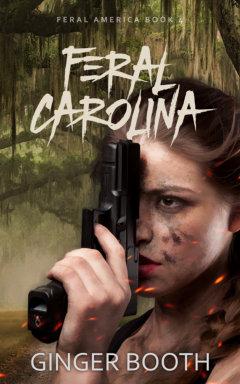 Her new boss is from Florida, recent conquerors of Georgia and Alabama. His first message demotes her. The relationship goes downhill from there.

Ripped from Cade’s arms, Ava heads to Carolina as a double agent, Hudson and death angel.

The company’s Carolina operations are a shambles. Hudson wants to halt Florida’s wars of expansion. And a women’s expedition hopes to instigate peace.

All Ava wants is to go home to Cade. Except there’s that little matter of revenge for the murder of New York City.

They arrived in the shallows, and hurled the paddles harpoon-fashion to shore. Cade hopped out first, then lifted Ava out by her waist. He held her to him for a kiss along the way. Then he pulled the canoe back out a little ways, until the water came to their collarbones, Cade standing in deeper water. He swamped the boat from one side, then pulled it over on top of himself.

His hand emerged to tug her bathing suit. Come on in.

Ava ducked under the canoe edge. Cade set a light hand on her head to protect it from a cross-brace, and reeled her in closer with the other arm.

And she emerged in his arms in a private world. She expected dark under the aluminum boat shell. Instead, light refracted through the water below and lit their space, wave lights rippling across the hull above them.

“Very,” she agreed, and kissed him thoroughly. “We could do anything in here,” she added as she broke off for air. She hopped up to wrap her legs around him, and —

“You left your phone on?” Ava whined.

Ava froze a fraction of a second, to register that he didn’t think it was a drill. Every other scram had been a drill.

Then she exploded into motion. Underwater out of the canoe and to the shallows. Stand up running. Catch the keys and towel off the picnic table, still moving. Unlock the driver’s door before she reached it. She grabbed the phone and confirmed it contained a new message:

“Darcy, go dark,” she commanded. She snatched the navigation tablet and set both mobile devices to airplane mode. Then she clambered across to her passenger side, the towel protecting the leather upholstery. She grabbed her phone as well. Message, check. Airplane mode.

That was a relief. Two agents, one vehicle. She would share Cade’s scramble mission. Ordinarily, a message from Skull would say ‘Boss,’ not ‘Company.’ But all scramble drills said they were from the company — the death angel organization Skull led, which spanned most of the Eastern ex-U.S. Actually, scram drills were the only texts she’d ever received from user ‘Company.’

Whoever sent us a drill on our honeymoon is dead meat. And surely they realized that. Ergo, like Cade, she concluded that this was not a drill.