This is the blurb and a sample from Feral Courier, book 3 in the Calm Act Feral America series. 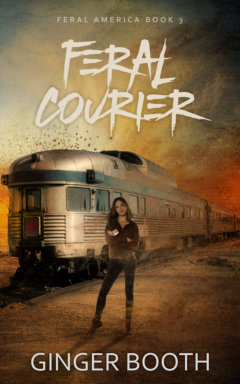 From gang rat to diplomat.

Ava Panic prefers a simple mission. If it bothers her, shoot it.

But with her partner benched, tiny Ava gets no respect from the supplier low-lifes in Ohio. Then she makes a chance discovery – Canada has advanced new cell phones.

In a crumbling world, this tech is a game-changer. The Northeast can’t produce the microchips. Neither can Canada. Where did they come from?

To find out, Ava has to cross the continent alone, slip into the Pacific Northwest undetected, and figure out whom to contact.

Canada holds the only route through the Dust Bowl, a single train. Under false pretenses, Ava is on it. Along with secret police, counter-agents, troops, and a lost defector from home.

And a whole lot of trouble.

Ava was growing jaded to luxury. When she arrived, the Nouveautel proved comfortable, but it wasn’t the Grosse Pointe Lawn & Racquet. Her room was on the 26th floor. She punched the elevator button in a trance, her face carefully schooled. She tried and failed to suppress the memory of her last trip above the sixth floor of a building. Six months ago she climbed to the sixteenth story in Greenwich Village to retrieve her parents’ wedding bands, and one small photo stick holding the family memories.

Her hotel room door had an electronic lock. She blinked with the lock as the LED turned green. She pushed the door open. A rocker switch turned on every light in the room and bath. She dumped her bags without a thought.

Still trance-like, she drifted to the window wall and drew the tall curtains to gaze onto the city view. She checked Jana. Yes, the phone could turn off the room lights for her. In the dark, Ava slowly and carefully photographed the Toronto night skyline.

“Jana, record caption. Toronto after curfew, from twenty-sixth floor Hotel Nouveautel.” Jana transcribed her comment clean and sanitized, without the husky emotion and catch in her voice.

The tears ran silently down her face as Ava hated Canada with a yawning ache that reached deep inside her gut and wrenched.