This is the blurb for Feral King, book 1 of the Feral Starve series. 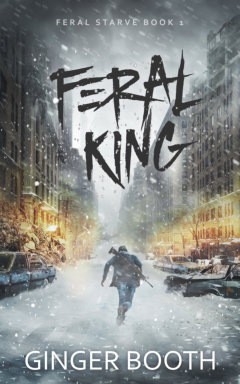 Ebola was the first hurdle.

Winter in Manhattan. Ice and wind howls down streets devoid of heat or light. Ebola killed their parents, wiped out a quarter of the city, including law and order. Frosty and his girlfriend Panic survived the disease. But the elements are their enemy now.

And starvation. And the gangs.

Their enemies are legion.

Two nice, successful high school students, the young black belts met in karate class, where they helped teach the novices. Now they form their own gang for self-defense. They claim a dojo and train other kids to fight for survival.

It isn’t nice. It isn’t pretty.

You fight. You LIVE!

Feral King is the intense, gripping start to Feral Starve, the dark tale of Frosty and Panic’s education in violence during the Starve that killed 9 out of 10 people in New York City.

Flashlight in hand, Ava slipped into the public hall and locked the dojo behind her. She started for the stairs, seeking Sensei and salvation.

A knock on the street door made her freeze. She’d shown a light, looking for the staircase. There wasn’t much point hiding now. She took a deep breath and aimed the light at the door.

Jeremy! He was one of her middle school students, a wiry dark-haired Italian kid, the dojo’s star competitor in his age group. She hurried to the door to let him in, and hugged him to her breast. The preteen sobbed in relief, the way she’d just imagined she would in Sensei’s strong arms.

Ava quickly unlocked the dojo and towed him inside. “Shh, Jeremy,” she crooned huskily. “Don’t. Don’t talk about them or we’ll both cry.” Too late. Tears squeezed from her eyes. He couldn’t see that in the dark, though.

“You’re alone?” The boy nodded against her breast. “Not anymore. You’re with us. Frosty’s asleep.”

Ava’s students never idolized her the way they did Frosty. “Yeah. Have you eaten?”

Ava suspected that meant the boy had more than a little food squirreled away.

“I saw you,” Jeremy continued. “We live across the street. I didn’t know it was you, though. But then you put out the sign. I had to try.”

“You’re brave,” Ava assured him. “I was about to try Sensei’s apartment. Not so clever.”

“Not alone,” Jeremy agreed. “But I’ll go with you. I wanted to try for days. I didn’t dare. There are gangs on the streets. And I couldn’t remember the apartment number. But then I saw you out on the ice. That was smart! No one’s out there. And it’s not so hard to walk on ice.”

Not hard for Jeremy, at any rate. The kid was a dexterous little monkey. He was even shorter than Ava, and thickly bundled for winter. A fall wouldn’t hurt him a bit.

Having someone younger than her to look out for grounded Ava. She sighed. “No, let’s wait for tomorrow. Frosty would get mad if we went up without him.”

His grumpy voice concurred from the pile of blankets. “You got that right. Hey, Germy, good to hear you.” Frosty couldn’t see them in the dark.

Ava had guessed right — hero worship, from up and coming 11-year-old to one of their top trophy winners. Jeremy fled her arms and landed skidding to his knees at Frosty’s side. Or rather right into Frosty, judging from the muffled Oomph! of protest.

“Yeah. Claim this dojo for our lair,” Frosty returned.

Ava was glad Germy couldn’t see him. This daring assertion carried less weight if you saw Frosty’s mottled face. Judging by his unblemished skin, the child never got sick.

Ava settled beside Germy and squeezed Frosty’s hand, once she found it in the dark. “Water Tigers is a perfect name for our gang.” Being called by her surname was weird, but she could humor him.