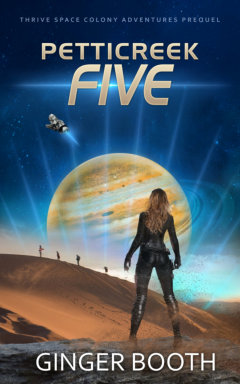 She cannot die. But this moon is killing her people.

Sass Collier took years to buy a spaceship, a dream born in humiliation and defeat.

Four decades ago, Sass arrived on the unpromising moon Mahina with refugees from Earth, the home planet now falling out of living memory. As a marshal, she mediates disputes between the elites of the capital and destitute settlers wresting a living from the moondust.

Settlers tucked their children into bed, then enjoyed an hour of free time before they slept. And out of the blue, they suffocated to death.

This isn’t the only injustice on Mahina — far from it. But it’s the final straw, the match that lights rebellion aflame. Irate as anyone, Sass becomes a ringleader. Settlers demand a shot at a better life!

Until the rebels go too far. Must she betray everyone?

Petticreek Five is an origin story for the humorous Thrive space colonization series. If you enjoy the motley crew of Firefly and the world-building of Heinlein, try Thrive!

The Rebellion was born three years ago in Schuyler, not Petticreek. Marshal Sassafras Collier banked around the afflicted area twice in her official flyer through the sparkling cool low sunbeams of Dawn, the first sun-up day of the week. She wanted to feel the mood of the disaster before she stepped foot in it.

Small figures below carried out the dead.

As a rule, settler villes on the dusty moon were ugly as sin, but Schuyler exceeded even Mahina’s exacting standards. The town aspired to become an industrial hub, not farmland. It offered all the mushroom-hued charm of a parking lot. The residential district featured block after block of shipping container homes huddled around an inner courtyard, marching along a treeless circle road. Most kept communal kitchen and sanitary facilities out back, still housed in the geodesic pressure tents used by laborers pre-atmosphere. They bore forty years of patching with duct tape.

The more civic-minded blocks erected a shade awning over a couple picnic tables, for folk to sit outside and socialize. Most blocks deployed private sunshades instead, or none.

Sass couldn’t readily see the end of the blighted district. Beyond the corpse trucks, other blocks seemed devoid of activity. But she spotted a clutch of marshal flyers, and banked to land among her own kind.

Clay Rocha, their leader, met her as she hopped out of the flyer, leaving their fellow marshals Tom and Sandman leaning on his flyer kibitzing.

“Clay. What are we doing here?”

“Orphans.” His model-grade features remained cool and detached, all business. “Some kids survived while their parents suffocated.”

She searched his face. “Hell of a thing. We’re not helping with the dead?”

“We’re staying out of it. Potential for explosion.”

Sass stiffened. “What explosives? Where? How do we secure them?”

Clay grimaced his insufferable condescension. “Figure of speech. They’re in shock now. But they could turn angry any minute. We stand here for mutual support. Handle the queries. Promise that all orphans will be cared for. By somebody.”

“Somebody who? The city’s not gonna take them.” Mahina Actual, the terraformers’ citadel that predated the settlers’ arrival, wanted nothing to do with the settler tragedies unfolding around them. They’d said the moon would be ready to accept immigrants a century from now. Earth sent a quarter million, far too soon. She couldn’t blame the urbs for feeling this wasn’t their fault.


Get it now!
Design by Adaptive Theme