Road to Humble Texas, a Calm Act side story. 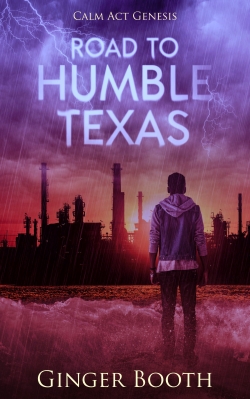 Kayden was a good soldier. Now he's down and out. Homeless and wracked by PTSD and addiction, he struggles to get clean and sober as America reels under the impact of impossible weather.

When his beloved America embraces draconian emergency measures, and apocalyptic hurricanes rip Houston apart, Kayden finds he's not as helpless as he thought.

Despite his demons, he can help others.

If he can pull himself together in time.

Road to Humble Texas is a side story in the climate apocalyptic Calm Act series.

Angry shouts from the front of the house roused Kayden. He was trying to take a baked siesta in the shed. At 105 degrees it wasn’t working. Julio’s crew hadn’t had any work in a few days. Houses still needed fixing in plenty. But people’s ability to pay was evaporating.

Kayden frowned in concentration, trying to hear what the argument was about. Something “God-damn Mexicans!” something “go home!” something “real Americans!”

Well, that tore it. Kayden snatched Julio’s carbine off its ceiling hook and snapped in a magazine. He didn’t bother putting his shoes back on. In well-trained movements that his body remembered for him, he sidled silently along the left of the house, no more than ten feet from the similar-sized house next door, taking care not to rustle the knee-height shrubby foundation plantings.

He reached the front corner and stole a look at the tableau. Julio stood 15 feet in front of the house, squared off against a posse of working-class white guys in their 30’s or so on the curb. Some carried clubs and knives. The lead loudmouth was halfway to Julio hurling abuse about America for Americans. Sabrina, Hermé, Jazz and Hector were crowded onto the tiny porch, Jazz blocking some younger kids inside.

In the heat, the leader had doffed his T-shirt and tied it onto his head for shade. A hostile rag-head, Kayden’s mind automatically reframed the scene. The guy was still speaking English. But that’s not what Kayden heard. His brain no longer believed it could comprehend the rag-head’s Pashto or Dari or whatever.