Blurb and excerpt for for Sanctuary Thrive, book 6 of the Thrive Space Colony Adventures. 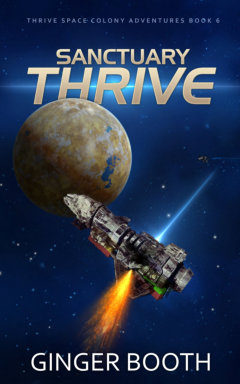 Sass versus AI!
Sanctuary, high-tech paradise with small-town charm!
Leave a message at the beep.

In a flash of old-fashioned warp, Sass’s crew catches up in time to Prosper.

Eager to greet a new world, instead Sass’s comms are blocked by an AI answering machine from hell.

Sanctuary is refuge to the Colony Corps who transported refugees out from Earth. Compared to Thrive’s home moon Mahina, it’s a paradise. People are healthy. Their dome stretches over sports fields. Electric horses and fun three-wheelers are available to venture out, complete with breath mask.

Robots do the work.

Something is off here. And Sass is doomed to fix it.

Can Sass liberate Sanctuary from its diabolical AI? Are Sass and Clay the perfect foils? Or just the most vulnerable?

And must Thrive crew get jailed on every world they visit?

Don’t miss Sass’s showdown with that nemesis your mother warned you about — someone just like her.

Seven minutes later, almost exactly the round-trip speed of light, they received a new missive from the lady in rose. “Thank you for your response, Thrive. What brings you to Sanctuary?”

“Not big on smalltalk, one feels,” Sass mused. “Sanctuary Control, we are here to connect with the only surviving colony we know outside Aloha. May I ask, how many people live in Sanctuary now?”

Her jury of peers felt this was perhaps a little too forthcoming, but not dangerous. She sent it.

Sass was snacking on a peach by the time the reply reached them. “Thrive, please redirect to our facilities in the asteroid belt. Coordinates attached.” Like the Earth system between Mars and Jupiter, the next planetary orbit out from Sanctuary was occupied by smithereens.

Darren muttered, “There’s something off about her.”

Like Sass, Dot was more intrigued by the message than the messenger. “Why would they abandon a planet to colonize the asteroid belt?”

Sass ran with that question, since she hardly knew Rosie well enough to get personal. “Sanctuary Control, we are confused. Our information placed Sanctuary Colony on the Goldilocks planet, on the shores of Great Alkali Lake, at 32.4 degrees North latitude. Is this no longer the case?”

They were clowning around with a can-can number when the next 7 minutes, 38 seconds completed like clockwork. Unlike Sass, the pink one’s replies seemed to require no time to think or confer.

And her response came out of left field. “Thrive, be advised that for the convenience of our trading partners, we prefer you visit our shipyards in the asteroid belt. All your needs can be met there.” The video froze at a placard providing the coordinates.

Sass pointed one of the ship cameras toward those coordinates. After a day or so she could study the recordings, but she didn’t expect to learn much from fuzzy visuals. Remi added the location to their navigation database.

Of more interest were the implications. Trading partners? Our shipyards? Her heart thudded. Was that even possible? Sanctuary not only thrived, but engaged in interstellar commerce with other human systems? That alone of the human diaspora, the Aloha colonies were backward?

That would be embarrassing. If she believed it. But she really didn’t.

Meanwhile Darren checked the time lag. Sanctuary Control’s responses came like clockwork. The messages were of unequal length, yet took exactly the same time to reply. Which meant they took zero time to compose. But these were data bursts, arriving as complete videos. His eyebrows rose. “Sass, you’re talking to a computer.”

“I never see an avatar so good,” Remi remarked, peering over Darren’s shoulder at the data. The pair of engineers got along fairly well these days. Sass used that excuse to drag them out of cold sleep together the first time, only a couple months after warp, and she stood by it. They seemed to split the ship’s systems in half, neither touching the other boy’s toys without invitation. Fine by her.

“Probability over 60%,” the computer allowed.