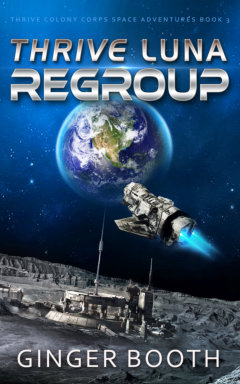 Thrive’s Earth tour concludes on freaky Luna, where the hidden agendas of three worlds collide. Will their expedition end in triumph, or a rout?

Yet the team is adopted by friendly folk on day one, eager to take them sightseeing!

Too bad they’re not Loonies. There’s a fourth player here. Will Sass and Ben get played?

From the shuttle hatch, a half level up from the hollow-core cargo deck, she could see that they’d pressurized the aft starboard section behind clear tarps. She kept a couple small trees there by the main staircase, with their own pressure tents for protection, since the huge hold was prone to air loss. Her chief engineer Darren Markley — acting captain now — had used the tree arrangements to anchor a temporary living space encompassing med bay, the head, the trees, and the entrance to the engine room. His airlock stood where her park bench used to sit.

Forward of this sanctuary, the place was a wreck. Her eye caught on a surviving end piece of the defunct bench. The catwalk above sagged in places. A twisted section of railing jutted outward. Torn metal, dessicated sewage, and heaped broken equipment ruled cargo forward. The normal lighting out out. Harsh work lamps illuminated a few pools here and there.

“Sorry I didn’t take better care of her.” Darren stood behind her shoulder, but murmured over their helmet comms.

Sass realized she’d let her horror show on her face, her jaw hanging slack. She firmly closed her mouth and forced a smile, the muscles of her cheeks aching from it. “Not your fault. I should have been here.” She reached a gauntleted hand back to press his arm. “I’m sorry. I… This is a shock.”

“He said that, yes. I’m not up to speed.” She should have firmly endorsed the commandant’s orders. Or perhaps overruled him, but either exceeded her acting skill. “None of the cabins hold air?”

“Several could. But I’ve only fixed the plumbing back here, so.”

“Understood.” No point pressurizing a cabin that couldn’t even offer a bathroom. “You were lucky the engine room didn’t take a hit.”

“Oh, it did,” Darren qualified. “Porter sealed the holes quickly, though.”

“Good man, Porter,” Sass murmured. Her engine room held the kitchen crops, lit by the star drive powering Thrive’s engines. The agronomist must have defended their plants under fire as Thrive escaped Earth a week ago, leaving her behind.

Because she’d ordered Darren to go. Was I wrong? Unfair to ask Darren. No doubt Ben Acosta, the Colony Corps Commandant, had a strong and valid opinion, and he’d share it with her soon. Ben said he’d soon be Thrive’s majority owner due to the extent of the damage. Her lover Clay sold Ben his share of the ship, and Ben’s Thrive Spaceways operated the repair yards.
Her denial had held strong. The damage couldn’t be that bad. She’d find another way to pay for repairs rather than sign over her ship to Ben.

But it was that bad. ‘Ten or twenty million credits to fix this.’ It wasn’t a question. No, to Ben, the pressing question was whether to repair it or junk it. Or rehabilitate it for atmo-only, the elderly craft’s days in space left behind.

This ship is younger than I am.

She’d only paid two million for it in the first place. Granted, she’d sunk plenty more since then. Thrive couldn’t break atmo when she bought the old skyship. By now they’d visited how many worlds together? Her mind skittered from the thought.

“You might pack your cabin, sar,” Darren prompted. “I’d rather not leave personal effects aboard. Light fingers on the yard crew.”

“Right.” Thoughts moving like molasses, Sass finally pushed out from the airlock at zero g. Thrive’s grav plate system was among its many injuries.

No, people take injury, the ship racks up a repair bill. “Darren? How bad were the injuries?” She should have asked that question long ago. The engineer left her to help the mink Fidget collect her toys. But both helmeted, they continued the conversation over a private comm line.

“Nothing the nanites couldn’t fix in a day or three,” Darren dismissed this. “Kaol nearly died of the bullet wounds, and Eli’s femur splintered. That took longer. But that fight was at the spaceport, not during takeoff.” Kaol was her Denali security guy, the botanist Eli head of science mission.

Sass finished drifting to the floor and caught hold of a stair railing. “Bullets?”

Darren recounted the Russian attempt to storm the ship, before he’d attempted takeoff under fire and Thrive sustained its near-fatal collection of holes. While she listened, Sass located the flattened plastic cartons they used for personal effects, then pulled herself along the forward ladder to the cabin level.

She felt every word of her crew’s misadventures like a sharp jab to her solar plexus, alternating with her gut and chin. I should have asked. I should have known. I should have been there leading them! “But you were OK, as soon as Ben arrived? He gated you straight out to safety?”

“Well, no…” Darren continued his sorry tale until they reached Mars orbit. “We were pretty comfortable latched to Merchant Thrive. Got all healed up. Except for Porter, he got injured again on Mars. But the C3 says we’re in uncertain territory now. Can’t lock ships again. So someone has to be over here all the time. I’d kind of hoped that would be you. And me. I mean, I’m not trying to evade responsibility.”

Sass guessed, “Ben doesn’t want me at the helm because he says you’re captain, not me.”

“And I’ll get her there. That probably means Thrive leaves with Friendship after our fuel resupply. And one of us leaves with Thrive.”

“Oh.” Sass’s comprehension of Ben’s directive flipped fast enough to cause vertigo. “He wants me to stay here, and let Thrive’s chief oversee the repairs.”

“Haggle over them, anyway,” Darren agreed. “Sass, you know Earth better than the rest of us. Ben needs you here.”

It’s not just a punishment, taking my ship away because he owns more than I do now. Or he will, by the time Spaceways presents the butcher bill. Did she even leave enough cash reserves to pay out salaries? No. Yeah, she had reason to dread her interview with her onetime protege.

She reached her cabin, officer country lit by nothing but her helmet light. No need to open the door — a convenient hole ripped through the wall, large enough to shove a refrigerator through.

She pulled herself past the shattered remains of dresser drawers. She and Clay kept a waist-high bank of cabinets along the wall here. A pair of dress pants and a couple knickknacks drifted near Clay’s extravagant computer desk at the far end of their shared double cabin. Space damage was so arbitrary. His desk looked fine. The potted plants around it stood dessicated, dead. A single hole passed through his chair’s headrest to drill a larger hole into the office next door.

‘Her’ end of the cabin didn’t fare as well. They’d patched the outer hull, but not the wall. Mattress and walk-in closet were beyond repair. Sass poked her head into the bathroom, so beautifully appointed by her wealthy and picky lover. My ex. Clay opted to stay on Earth when she left. She’d made the mistake of asking him to marry her. He answered. Her mind reeled from that change as well. Shards of fixture composite and glass mirror drifted with aspirin and tooth sonics, hairbrush and cosmetics, and a handy packet of stick-on crow’s-feet.

She snagged the crow’s-feet and belatedly popped one of the cartons into box shape. But tossing things in didn’t work in zero g. So she found a pillowcase to winnow what she needed. Bathroom harvested, she turned to her closet.

Inside a quarter hour, she finished sifting her belongings, with one box for storage and a half-box to carry along to Merchant Thrive, Ben’s flagship. Her keepsakes would join a collection of cartons in the hold for locked storage until their owners returned to the Aloha system. Her carry-on included toiletries, plenty of underwear, a couple T-shirts, some shorts, and two work coveralls. Undies were small enough to escape the carnage. The only surviving coveralls she scrounged from the laundry bin.

She set her things in the corridor, then returned to triage Clay’s stuff. His took four boxes. Darren promised to add the pricey desk to the manifest to cart out to storage later.

It’s not like I don’t own anything else, Sass consoled herself. A plasma beam destroyed her wardrobe. But her engine room full of plants, the trees in the hold, and the ship itself didn’t need packing. Someone would have to tend the plants, she supposed. She suggested Darren contact their old friend, the Denali farmer Quire, now living on Mahina Orbital. Quire could be trusted to protect her plants while the repair yard did their worst.

Ben estimated she’d own a quarter of Thrive, after the bookkeepers finished.

She deposited her cartons where they belonged, including Clay’s things. Strange how final that felt, as though her relationship ended when she deposited his stuff on the curb. How long had they been lovers? Her mind bounced off that bit of math. They’d been in each other’s hair for a century, one way or another.

“Darren? The officer’s cabins can return to their original configuration. Four staterooms forward instead of the double. Or…as Ben prefers.”

“Aye, sar,” the engineer murmured gently. “Sorry to hear about your breakup with Clay. That’s…wow.”

“Yeah. Darren, you’re captain now. I call you sar, not the other way around.”

“Not necessary, sar. Ready to go?”

“Not just yet, please. I haven’t taken the grand tour.”

The pictures, carefully lit and explained in detail, showed her more than a stroll ever could. He hadn’t worked alone on them, either. Ben’s chief engineer Remi had accompanied Darren and herself on their 3-year trek to Sanctuary, and Ben himself lived on Thrive for years. Anything mechanical, they knew intimately, better than she did. They helped Darren with the repair evaluation.

No, hardware expertise wasn’t what she could offer. She found a relatively strong section of catwalk railing and anchored herself with a D-ring. Then she floated to the middle of the hold and looked around, consulting Darren’s repair specs. Careful to mark her annotations ‘wish list,’ she offered notes and suggestions. The testosterone-colored tiles in the giant crew bath were important, as were the spare fold-down bunks in the one-person cabins. When rebuilt, the ruined catwalk should be rubberized like Ben’s on Merchant. She kept at it until she could envision the ship alive again, a choice assignment, a snug and happy home among the cold stars.

Would she be its captain? I still own a quarter of the ship. Unless Ben insisted otherwise. This, or something better. Weird how it was easier to imagine the wrecked ship restored to cozy, than to picture her own life back on a successful footing.

You’ve failed and lost it all before, Collier. You just keep walking.

She couldn’t see her new life just yet, and that stood to reason. Her next few months wouldn’t be on this ship. Thrive would be in the dockyard a long time. She had lawyers on Mahina to watch her interests, but they wouldn’t matter as much as her actions here. Because when push came to shove, Ben Acosta either wanted her in the Colony Corps, or he didn’t. He either wanted to rebuild Thrive, or he didn’t. Which meant her future was best served pleasing Ben, not haggling in the courts.

No, she wasn’t sure about anything. And that was as it should be.

“Darren? Ready to go whenever you are.”


Get it now!
Design by Adaptive Theme