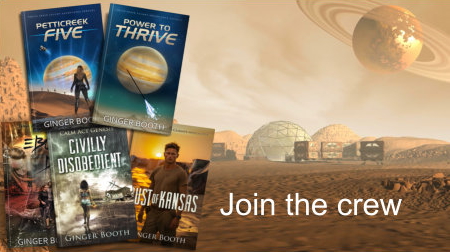 Please tell me where to send your free copies of Petticreek Five and Power to Thrive. Both stories are short prequels to Skyship Thrive.

You'll also be added to my Reader Group, with infrequent news and deals, and free prequels to my other series. Unsubscribe any time.

She can't die. But this moon is killing her people.

When an 'air drop' suddenly kills hundreds of innocent settlers, Marshal Sass Collier investigates. That's her job, to mediate between the urban elites and the refugees scraping by outside the dome. She arrived from Earth with the settlers herself.

People are mad as hell, and she has to agree. She joins their efforts to improve their lot. Until they take rebellion a step too far. Must she betray everyone?

Preparing for baby — in all the wrong ways.

On the colony moon of Mahina, the citadel holds all the power — literally. Scrappy mechanic Copeland concocts an audacious plot to steal some back.

The caper that landed Copeland and his baby in the phosphate mines.